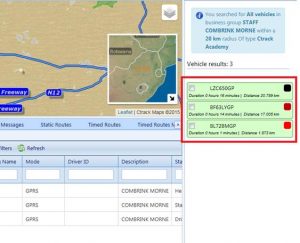 IVMS/ GPS Tracking changes driver behaviour in the longer term: as soon as drivers know there are IVMS/ GPS Tracking systems in their vehicles, they slow down and they drive more gently. Nobody likes to be reported as a law breaker or as somebody that damages their employer’s vehicle – this makes IVMS/ GPS Tracking one of the most effective tools to not only save lives, but also save costs. As we have maintained through the years: IVMS/ GPS Tracking pays for itself through damage and vehicle abuse reductions, driver safety comes as a free and very vital add-on.

A problem with any IVMS/ GPS Tracking system is that it has many single points of failure: a single unit off a single power source (open to tampering), data coming through a single Telco link to a single point and processed on a single server. Of course Digicore takes whatever steps it can to ensure that our IVMS/ GPS Tracking systems are served by as much redundancy as we can provide, but the reality is that we cannot double up on every single link between a vehicle’s dashboard and a customer’s online display – this is not only virtually impossible but would also be cost prohibitive.

So how can IVMS/ GPS Tracking be made an even safer system when it comes to driver protection?: There are a number of ways. Fitting a high-gain antenna or a satellite radio would make IVMS/ GPS Tracking safer in terms of network coverage, having additional data links into an IVMS/ GPS Tracking supplier’s site helps in the event of a high-speed link failure, but these all still have to do with getting data into a server.

Here is an example:

Darren left the office at 08:00 am and should be at point one by 12 pm and at point two by 3pm. He arrives at point one in time, but then something happens and he does not arrive at point two in time. Up to point one the IVMS base system is happy and does nothing, but when no position data is received from point two by the set time, the base system escalates to a monitoring station or it sends an SMS to a set number. This is where a human being gets involved – hopefully the problem lies with some small technical issue somewhere and it can be closed off, but if not then the IVMS/ GPS Tracking online interface is used to see when last contact was had from the vehicle and emergency services can be dispatched if necessary.

IVMS/ GPS Tracking – a system that truly pays for itself every step of the way!