Why we don’t recommend the use of satellite navigation and especially messaging screens linked to our IVMS. 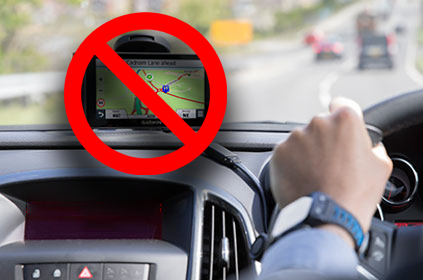 People often believe IVMS GPS tracking and satellite navigation go hand-in-hand. There seems to be some confusion that somehow they are the same thing in different forms.

The reality is though, they couldn’t be more different. Whilst it is true that both IVMS and satellite navigation utilise GPS information, their purpose and function differ wildly – and in some significant ways, conflict completely.

IVMS’s predominant role is to monitor driver behaviour and promote better, safer driving habits, which in turn encourage a safer work environment by the simple fact that the drivers are aware they are being monitored. IVMS also provides a detailed history of a vehicle’s movement for retrospective analysis which helps fleet owners better understand the utilisation of their vehicles and other assets, as well as providing vital data in the unfortunate event of an accident. Providing vital data to what lead up to the event which in turn can be used to prevent a repeat event from occurring.

Satellite navigation on the other hand is designed to navigate a driver to a destination. It implements this with a touch screen and speech. In our opinion whilst this is no doubt a very useful tool, it also serves to distract the driver’s eyes and ears from the road on a regular basis. When one adds driver messaging into the mix which requires even more interaction with the screen and further distraction, one has a recipe for disaster. At best it opens the fleet operator up to litigation in the event of an accident. Worst case an ill-timed distracting message has the potential to be the cause of a serious injury or even a fatal accident.

Given IVMS is predominately a safety measure, it goes completely against its core function to introduce extra distractions such as satellite navigation and driver messaging. This may come across as being pedantic as it is unlikely to happen, but we need to ask ourselves if we are willing to take that risk with our staff.

According to the ABC, official records suggest that driver distraction accounts for at least ten percent of fatal accidents and eighteen percent of accidents involving serious injury. Road safety researcher Professor Michael Regan, from the Australian Road Research Board, said the real numbers in Australia are much higher than official figures indicate.

“It’s an underestimate, because when you look at studies where drivers are observed for weeks or months or even years, like they have in the US recently, they found that 68 per cent of the crashes had distraction as a contributing factor,” he explained.

Professor Regan also discussed how modern in-car technology can contribute to the problem.

“The trouble with these touch screen displays is, firstly, they’re not well located, they might be too far away, and once you start interacting with them sometimes you have to go two or three layers deep into a menu to find what you want,” he said.

A study by the Virginia Tech Transportation Institute in the United States has looked at the increased risk posed by different activities.

The study found that the risk of an accident increased by:

These statistics truly reflect Digicore’s position on the use of satellite navigation and driver messaging devices, especially when integrated with our IVMS system. We are at our core predominately an OH&S service provider and we will gladly lose business if it means we are not contributing to these devastating statistics.